In honor of National Pi Day in the US, we are going to revisit an old blog post where we compared the performance of C# to C++.

This is a really simple comparison, but we can still learn a few things!

We are going to use a VERY slowly converging series to calculate π to 15 decimal points, which takes close to 100 million iterations to accomplish. The formula is the Leibniz Formula and can be represented as a mathematical series as such:

Microsoft has been hard at work, rewriting their .NET platform from the version that has powered enterprises over the last 15 years, to a more platform agnostic, open source version called .NET Core.

We thought it would be interesting to compare .NET Core calculations to the previous .NET Classic calculation that was written in C#. We also decided to compare the very popular Node.js runtime, which drives a lot of web development, both with NPM for client development and on the server.

There were 10 iterations of each code run on Windows 10. You can find the code on Skyline’s Github account at pi-day-leibniz.

As we can see, the performance of .NET Core is pretty impressive on Windows! Three times as fast than .NET Classic and 7 times faster than Node.js. This passes the smell test too. We expect a more modern rewrite of .NET to perform better. Node.js is also an interpreted language, so it will not be as fast as compiled code.

We then compared the performance of .NET Core and Node.js across operating systems on the same machine, in this case, Ubuntu 17.10 and Windows 10. Since both code bases are multi-platform, we can see how they compare across OSes. 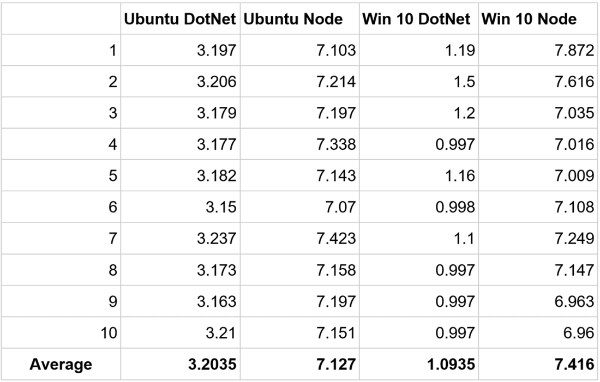 Node.js performs slightly better on Ubuntu than it does on Windows. Given that Node.js uses Google’s Chrome JavaScript engine, we would expect similar performances across platforms.

Dotnet Core in this instance though is about three times slower on Linux than it is on Windows. This makes sense since Microsoft is the creator of Windows 10 and will have tons of expertise on optimizing application for the operating system.

Microsoft’s C# classic is not the company’s future direction. They are 100% in on the new .NET Core platform and enabling developers to build things on Windows, Mac or Linux. This is a remarkable turnaround for a company that once called Linux a cancer.